You could call it the “haute hoodie”. Or at a stretch, fashion’s response to the energy crisis. Either way, in the latest crossover between catwalk glamour and high street practicality, the hooded dress has been dubbed the “warmdrobe look” of winter 2022.

No two hooded gowns are the same, of course, and at the higher end of things they come sheer and tight. On a chilly night in New York last week, the model Kate Moss presented an award wearing a sheer olive-green silk jersey dress whose only warmth came from a built-in hood. Earlier in the month, Beyonce wore one by Saint Laurent in aubergine, which she paired with sunglasses. Completing the triumvirate, the British actor Michaela Coel went for a floor-length Ferragamo gown with matching hood, in sheer chocolate fabric dotted with crystals, to the LA premiere of Black Panther: Wakanda Forever.

On the high street, the trend is more relaxed – at River Island, they come in mid-length jersey, resembling a long hoodie, while at Liz Truss’s go-to shop, Karen Millen, they are made from recycled knitted polyester. At Raey, the hooded cashmere dresses are so long, they pool on the floor.

The best starting point, says the US hood designer Shahini Fakhourie, is to treat it like an accessory by keeping the hood separate: “It makes it much more versatile.” Fakhourie has been making separate hoods in black and taupe from recycled nylon for two years but thinks the rise in luxury hoods is simply another convergence between streetwear and high fashion. “[Hoods] have represented so much throughout the history of streetwear,” she says.

From modesty-wear to the visual rhetoric of David Cameron’s problematic “hug a hoodie” campaign, few accessories carry such vast symbolism. But for an item often designed to render its wearer unseen, paradoxically it can have the opposite effect. In September, the actor Katie Holmes attempted to make a low-key entrance to a show by wearing a black hooded Tom Ford dress, which subsequently went viral. It was precisely this mix of “dramatic flair” and “ease” that attracted the paparazzi, says Heather Gramston, head of womenswear buying at Browns, which stocks the £2,550 dress.

Hoods on dresses feel modern, but are nothing new. Recalling the Yves Saint Laurent “capuche”, Kylie Minogue’s white hooded jumpsuit from I Just Can’t Get You Out Of My Head (designed by Mrs Jones, it sits in a Melbourne museum) and Grace Jones’ various hoods worn in the James Bond film A View to A Kill, Gramston prefers to call the trend “gothic glam”.

Saint Laurent designed his cowl version in 1969 then again in 1985. Proving so successful, the label repeated the look in 2002, in the final couture show before his death in 2008, and again in the Saint Laurent show last September. But it was the haute hood, created by Azzedine Alaïa and worn by Grace Jones playing May Day in 1985 that lingered in popular culture – and inspired Fakhourie’s hoods.

Part housecoat, part dressing gown, they were also a favourite of the 1970s dinner party. The US designer Halpern was inspired by “hostesses to fabulous house parties inspired by those thrown by his own mother in Upstate New York” when he included several hooded dresses in his most recent collection.

Like all successful trends, however outlandish, there’s usually a hint of practicality. “They also keep your head and ears warm”, adds Fakhourie. “It elevates a look – but I wouldn’t doubt the practicality either.”

How one hair stylist is changing the beauty industry

Sat Nov 19 , 2022
MUNCIE, Ind. – A single hand grips a spray drinking water bottle and douses a kinky curl with droplets. Two hands rub a shiny oil collectively right before combing it by the ringlet. Eventually, a moisturizing cream is used completely. The technique is identified as LOC, and it stands for […] 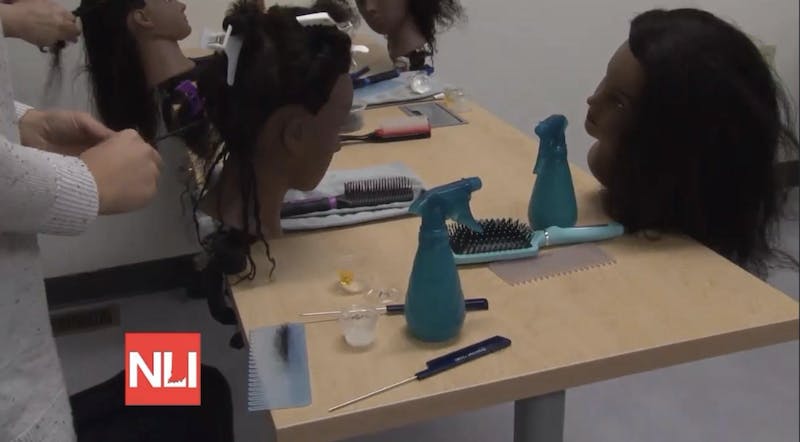